Each month, I look at the most liked recruiting content over a seven-day span on Facebook, the most retweeted recruiting tweets on Twitter, and the most viewed recruiting videos on YouTube. Here’s how three top brands are effectively engaging job-seekers on social platforms — and how you can emulate their success.

UnitedHealth Group Careers posted a link to a brief article about “Stacy D.,” the company’s Senior Director of Software Engineering. But the article isn’t the point; it’s well known that many people read only the headline of a story posted on Facebook — even if they end up commenting on it. So what matters here is the headline, the text, and the image.

The post’s copy reads: Learn what [Stacy] loves most about working with our Fortune 14 enterprise, and how her experience here has helped her career growth. A lot of good words there that sound attractive to top talent. UHG was smart to feature an employee, as personal stories often resonate better with job-seekers than approved and often banal statements from the C-suite.

But what makes this post a winner is the accompanying photo of Stacy — not sitting at her desk or shaking hands with someone at a hospital. She’s in full equestrian gear and handling a horse! An unexpected image that shows the UHG values work-life balance (and gives a subtle clue to salary — horsemanship is not a cheap hobby). The sub-headline goes one step further, equating the “fine-tuned relationship” between rider and horse with that of a software engineer and her team. The result is 27 likes and a comment…which drew a kind response from UnitedHealth’s Talent Community Manager. 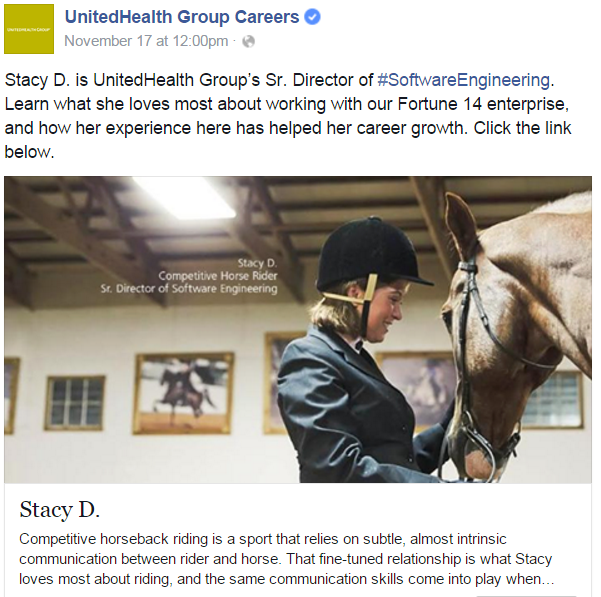 How you can be like UnitedHealth Group: Featuring employees in social media posts is always a good strategy, as it helps job-seekers relate to the company on a more personal level. The post plays up a software engineer’s responsibilities and career advancement opportunities while at the same time showing what they can accomplish in their spare time. The photo seems to capture a candid moment between Stacy and her horse and looks much different than the standard business-suit-and-gray-background employee photo. What hobbies or interests or accomplishments do your employees have? Who are they beyond their job description? What do they mean to your organization — and what does the organization mean to them? Also worth noting is the response to the Facebook comment by a member of the recruiting team. Is your recruiter monitoring Facebook for questions, concerns, or complaints from job-seekers? If not, what does that say about your attitude towards them?

SpaceX’s recruiting Twitter account, @SpaceXJobs, recently tweeted a photo of its interns. The copy reads: These fall interns are key @SpaceX team members. Check out all our internship opportunities, followed by a link. The image shows several dozen young people in front of SpaceX’s headquarters, making an “X” with their arms. A nice nod to interns, who are often overlooked (and underrepresented in recruitment materials). But not very compelling copy, and the photo doesn’t show interns designing spacecraft or attending launches.

And yet the engagement for the tweet was sky-high: 158 retweets and 453 likes. Why? Because of the First Rule of Social Media: People love to share content about themselves! SpaceX gave 50 Millennials a reason to retweet the photo, simply because they’re pictured. If you think SpaceX must always get Twitter love because it’s a cool company that launches people into space, look closer. Many tweets generate engagement only in the single digits. This post is an outlier, and it’s because so many people are featured. The photo also provoked 17 replies, ranging from interns thanking the company to job-seekers asking questions. A successful post by both hard and soft metrics. 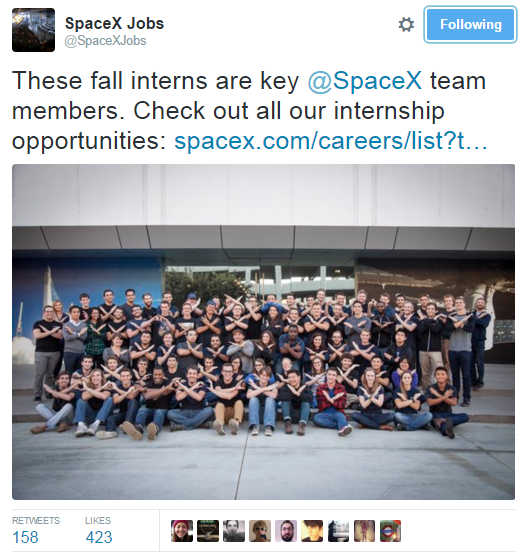 How you can be like SpaceX: I see two lessons here. First, feature your employees. No more stock photos. Job-seekers want to connect with the people at your organization and hear their stories. After all, it’s actual people, not slogans and bullet points, that make up a company’s culture. The other lesson is to remember the interns and entry-level workers at your organization. They will love the recognition, and it will show that you care about every employee at every level. And since those workers tend to be Generation Y — and soon Generation Z — they’re more likely to be on social media and to spread the love around, as Twitter users did for SpaceX.

I tell clients all the time that they don’t have to spend a lot of money or produce a Hollywood-worthy film to create a strong recruiting video. Brent Redmond proves my point perfectly. Its series of employee testimonials look like they cost nothing — and I mean that as a compliment. As a transportation company, its front-line employees are truck drivers, whom many wouldn’t consider the most articulate or camera-ready subjects. But these brief, single-take videos express an honesty and transparency that is impossible to duplicate.

The Joe Legarretta video is a great example. It runs just 49 seconds. Joe stands in front of his truck, in cold-weather gear (the company didn’t even wait for a nice day to shoot), and talks about his six months at the company. He says things that recruiters don’t often include in their materials, like “I was looking for a job that paid good” and “It’s a difficult job.” But Joe goes on to say that the company “makes a sincere effort to take care of you as a driver.” No viewer would say he was coached; he seems to be speaking off the top of his head. I imagine truck drivers don’t care much for artifice, so they probably connect with Joe’s bluntness.

How you can be like Brent Redmond: If these raw videos, shot in one take — possibly with a cell phone — with no special lighting and no graphics, don’t convince you to produce recruiting videos, nothing will. Brent Redmond didn’t try to spin its driver jobs as something romantic and didn’t add shots of a desert highway at sunset. It simply let its drivers talk honestly about the job and the company. Isn’t it time to turn the camera on your own employees, at all different levels and all different positions? What gems will you discover when they speak about your organization from the heart?

The most popular social recruiting posts this week all exemplify one best practice: Showcasing your employees. SpaceX did it with a photo. UnitedHealth Group did it with a brief article. Brent Redmond Transportation did it with a short video. Your employees are a great resource for testimonials that go beyond standard talent acquisition clichés. And when you create social content about them, they’re very likely to share it with their own social networks, becoming employer brand ambassadors for your organization.