Last December, I looked at how the greatest global brands celebrated the holidays — Coke was bubbly while Apple fizzled. How have both companies improved their holiday game? And who are their biggest rivals?

Several car companies rank very high on Interbrand’s 2015 list of most valuable global brands. Yet none of them seem to take advantage of the holidays with anything other than discounts and special offers. Toyota (#6 on the list) simply makes Christmas part of Toyotathon. BMW (#11) has a nice photo on its homepage, but little else. #12 Mercedes-Benz offers some holiday accessories and that’s about it.

I think these car companies are missing a huge opportunity for holiday branding. Selling cars may be harder than selling soda, but there’s no shortage of innovative ideas in the automotive field. Porsche recently produced “The Art of the Thrill,” a cool interactive experience. Chevy has put all kind of extreme stunts on YouTube. And just a few years ago, BMW hired action direction Guy Ritchie to create a short film that featured its car. So why nothing social or mobile or interactive for December? The biggest auto brands seem to be just spinning their wheels.

Microsoft is #4 on Interbrand’s list, and the gift-giving season is an important time for a make of laptops and tablets. So what did the computer giant do for this holiday season? It staged a stunt that AdWeek called “surprisingly sweet.” Employees from the new Microsoft in New York store walked a few blocks up Fifth Avenue to enemy territory, the Apple Store, and sang “Let There Be Peace On Earth.”

This was a clever idea. Think about it: It was an ad. A live event (the Apple employees are clearly surprised). A song. A YouTube video. A stunt that was covered by AdWeek, Forbes, and others. An easily shareable piece of content that winked at the biggest corporate rivalry of the last 20 years. And something that could only be done during the holidays. It might strike some as a bit odd — since asking for “peace” from a rival that regularly beats you can appear desperate — but I think it was a success on virtually all fronts.

Google, third in Interbrand’s rankings, once again offers its Santa Tracker, allowing users to track St. Nick as he flies around the globe on Christmas Eve. But that’s nothing compared to its entire interactive Advent calendar, with 25 days of games, videos, quizzes, and fun facts. The company also partnered with a special needs project through DonorsChoose.org, matching donations until its million-dollar goal is reached. There’s even a hashtag for the campaign: #ForEveryKid.

That leaves just two brands at the top of Interbrand’s list: Apple and Coca-Cola. Who won the holidays this year?

While Apple gets points for its lovely video of Stevie Wonder and Andra Day singing “Someday at Christmas” (embedded on its homepage and playable on Apple TV), Coca-Cola treats Christmas as if it owns the very day itself. This continues the brand’s long tradition, since it began using Santa Claus in ads in the 1920s and helped cement that image of the character in Americans’ minds. Coke’s holiday website offers recipes, including a pumpkin cola float and Hanukkah latkes with Coca-Cola applesauce. There are stories, ranging from “How Coca-Cola collectors design for the holidays” to “Three Jewish/Christian couples share stories of love during the holidays.” 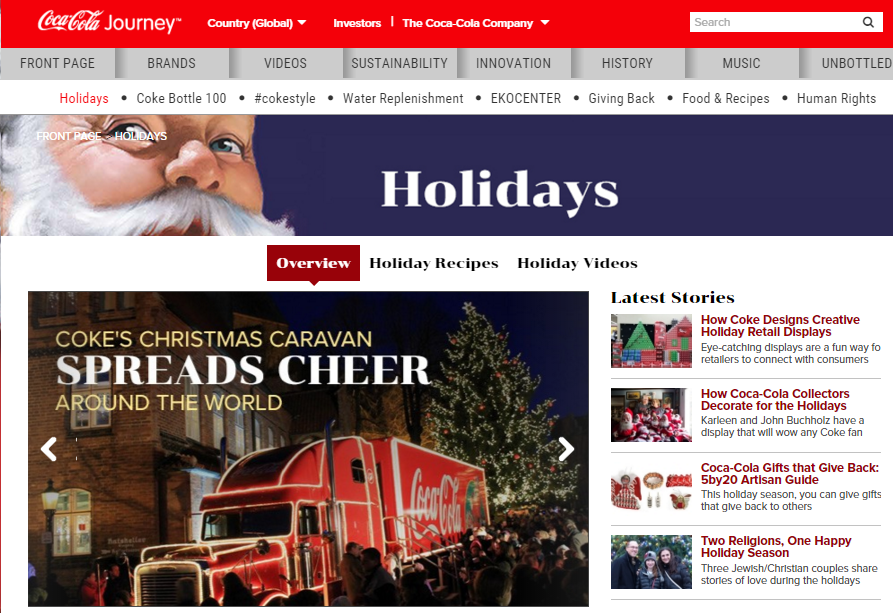 But that’s not all. Videos including choirs singing carols, instructions on how to sign “Merry Christmas,” and a collection of Coke’s holiday commercials from the 1950s. There’s a piece on Japanese Christmas traditions. Charlie Brown makes an appearance. There’s even an article about “bolstering” your career during the holidays. And, of course, the polar bears are there for some wordless holiday magic. For every piece of branded content that promotes the company, there’s an un-branded, well-written piece like “7 Hanukkah Traditions from Around the World” that simply celebrate the season. The site is fun, smart, and sticky, with something for everyone.

It’s no contest. Though Apple is Interbrand’s #1 brand, with a $170 billion value that’s more than double Coca-Cola’s, the soft drink company completely owns Christmas — and maybe Hanukkah, too.