Despite all the recent negativity regarding Facebook surfacing in late 2018, Facebook’s other major social media platform, Instagram, sits comfortably on its throne as the most dynamic social media platform used by Millennials and Gen Zers. Instagram focuses on visual content rather than written- allowing the platform to avoid many of the pitfalls its parent company faces with its flagship site-overpoliticization, oversharing, and “fake news.” For these reasons, it’s easy to make the connection that Instagram, which boasts approximately 600 million users under the age of 35, exists as the best outlet to focus your company’s branding in 2019.

Here are some of our tips to craft successful Instagram posts.

Instagram is a visual platform. Because of this, the focus of any post should be a high-quality image. That’s not to say that each post requires an expensive photographer with a fancy, high-definition camera. Phone cameras, particularly those in the new iPhones and Google phones, are advanced enough to capture high-quality images.

Instagram encourages its users to embrace the age-old saying that pictures are worth a thousand words. Consider this post from Instagram’s own profile: 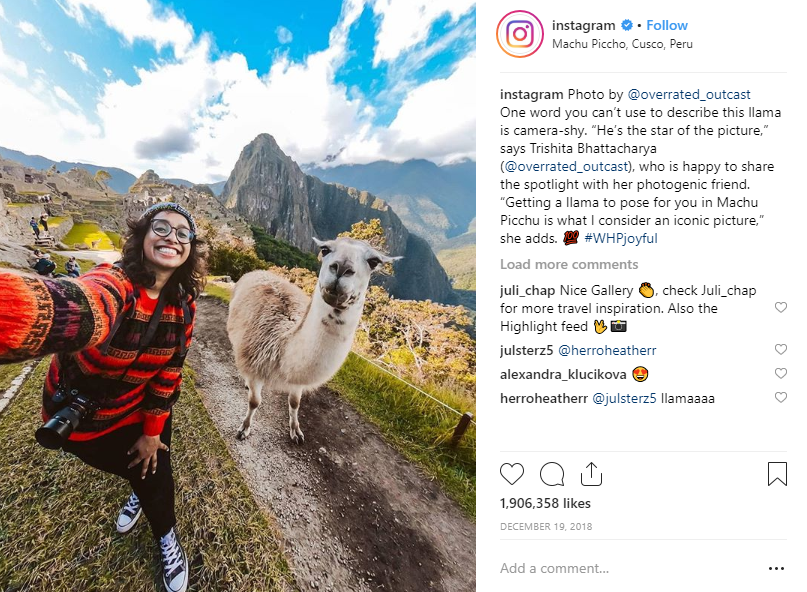 This photo uses a phone’s selfie feature to paint a vibrant image- a beautiful landscape and smiling young woman are joined by an also smiling llama. This image is unique, beautiful, and funny-a successful combination that will likely hold an Instagram user’s attention. A successful image holds the viewers attention long enough for them to engage with it-either by double tapping the picture to like or reading the caption and comments.

2. Short and Sweet but Make a Point

A high-quality image draws a viewer’s attention, but a thoughtful caption can round out the image to tell a story. Using the same post from Instagram’s profile, the caption of this image forces attention to the photo’s animal star, the llama:

“One word you can’t use to describe this llama is camera-shy. “He’s the star of the picture,” says Trishita Bhattacharya (@overrated_outcast), who is happy to share the spotlight with her photogenic friend. “Getting a llama to pose for you in Machu Picchu is what I consider an iconic picture,” she adds.”

Though the post showcases its photographer’s achievement in climbing to Machu Picchu, focusing the caption on the llama sets this post apart – creating something new and fun from an already impressive image. Using words to supplement, rather than distract from, an impressive image, adds to the post’s overall success. Though the picture already says a thousand words, adding just a few more turns an interesting photo into an iconic one.

3. When There’s More to the Story

Instagram’s story feature, similar to Snapchat’s, was released in 2016. Since then, Instagram Stories have become one of the staples of the platform- with both high-profile influencers and companies using the feature to promote their brand. The feature uses a Snapchat-like system of photo and video posts that disappear after 24 hours. Instagram’s version remains distinct by containing options for polls, links to outside sites, and sponsored advertisements. Often Stories are used along with posts. Consider this photo from Instagram’s page: 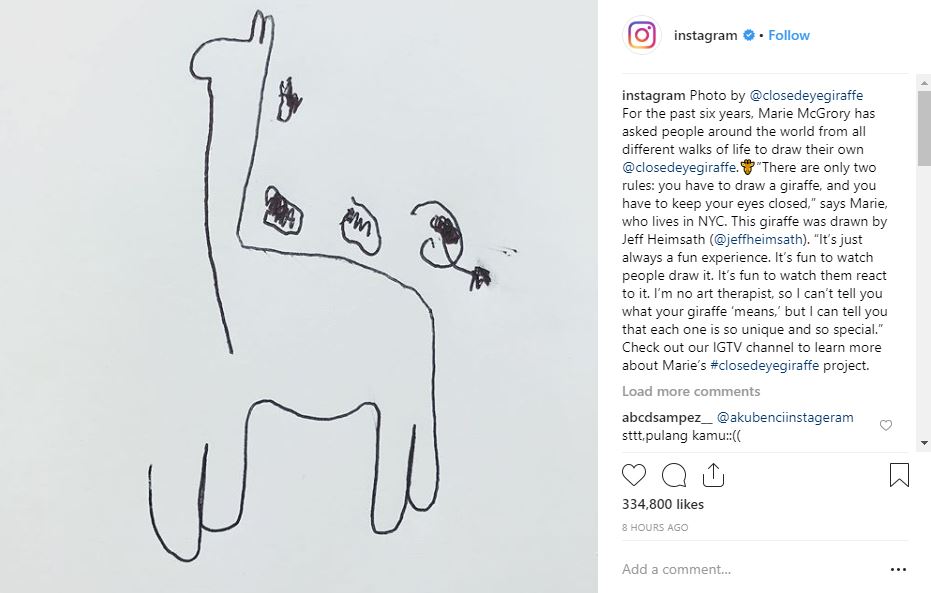 No, this isn’t a drawing from a kindergartner. It’s a drawing of a giraffe by someone with their eyes closed- the focus of art account @closedeyegiraffe The art is contextualized by both the caption and an accompanying Instagram Story- art on the page is drawn by people with their eyes closed. The post then uses a ten second video Story to show this concept in action.

While Story posts disappear after 24 hours, Instagram also features IGTV, a YouTube-like service that features longer video content- typically videos up to an hour in length. This post points the viewer to IGTV to watch more content. There you can find a three-minute video of the artist in action. Cohesiveness between image, text, and video are key to social media success.

4. Highlight to Organize Those Stories

In addition to Story posts, Instagram also boasts a Highlight feature- which allows Stories to be saved and added to a user’s profiles for future public viewing. Instagram places Highlights near the top of profiles:

Using this feature allows for short video content to be saved on a profile in easily accessibly groupings. Often these Highlights are used to craft an aesthetic. On Instagram’s profile, the feature is used to showcase various influencers, as well as creative uses for Stories- how can you use Highlights to its fullest potential?

The account, which boasts 275 million followers, only follows 213 people. Among these 213 are some of the most notable celebrities and influencers for Millennials and Gen Zers- NBA star Stephen Curry, dancer Maddie Ziegler, and even the cast of The CW’s Riverdale. The focus on who the page follows adds to the profile’s clear directive- a focus on the platform’s bread and butter demographic.

As Instagram reigns supreme for Millennials and Gen Zers in 2019, using the platform to supplement your branding proves as an important tool moving forward. And while you may not need a professional photographer to capture some high-quality pictures, using the platform to its full potential should be in your arsenal.