Unconscious Bias and Your Talent Brand 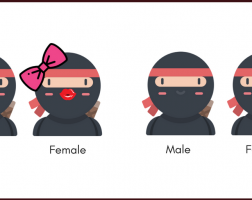 A job description is often the first impression a candidate gets of your company, and the language you use ignites the imagination.

“We are looking for a tech rockstar! Hard-working, with strong leadership capabilities and an ambitious drive. An all-around ninja that can jump around from task to task.”

You read this job description, and what do you imagine about the company as you read it? Most likely, a young, startup with a filled with “tech bros” and ping-pong tables.

Whether that is truly what the company is like or not is immaterial. Using language that is unconsciously biased can have a huge impact on your applicant pool.

Newton Software conducted several studies, researching how terms are perceived by candidates. They even note that at first, they “wrote off validity of gender discrimination in job descriptions,” yet by the end, they found a “startling picture of how masculine gendered wording can perpetuate gender inequality and division in the workplace.”

In their report, they discovered that words such as assertive, ambitious, independent, outspoken and self-reliant were associated with men. Words such as cooperative, kind, honest, loyal and sensitive were geared towards women.

Likewise, a recent article by the New York Times focused on a simple exercise conducted by a professor, in which she asks her subjects to “draw an effective leader.” The exercise is now used by organizational psychologists worldwide, with similarly troubling results:

How to Fix the Problem.

Society has ingrained expectations of what each gender is like, and there’s no magical fix to gender bias in the workplace – unconscious or not, but there are steps you can take to mitigate it.

1) Educate and Collaborate. Studies have found that gender bias is unanimously unconscious, meaning that people may not even know it’s a factor of concern. Educate your team about the phenomenon, and have a variety of people look over the description to catch anything that might have slipped through the cracks.

2) Leverage Your Image. While a description might be the first impression, it’s not necessarily the only impression. Creating a social and digital presence that encompasses your values, diversity and culture helps to balance an unintentionally biased description.

3) Stay Focused. Your job to make sure that all candidates are empowered to apply. Avoid using buzz words such as “rockstar” and “ninja” in your descriptions – as most people (unfortunately) picture a male.

And finally, of course there are male and female ninjas.